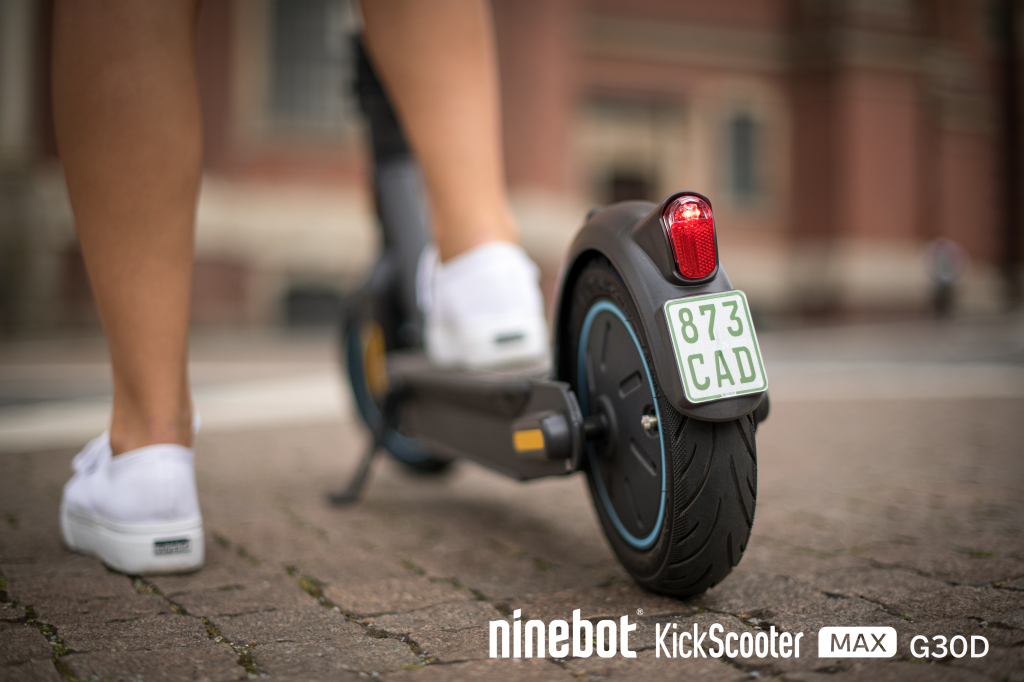 The new flagship Ninebot MAX series from Segway-Ninebot further increases the range and comfort for the more frequent urban commute. The 2 new electric KickScooter models, the Ninebot MAX G30 (for the broader European market) and the Ninebot MAX G30D version (specially developed to be “street-legal” in Germany) offer a whopping range of up to approximately 65 km* on a single charge as this new mode of urban mobility gains increasing legitimacy around the world.

Ninebot KickScooter MAX G30Additional to the world’s longest battery range within its class (up to approx. 65km*), the new Ninebot MAX G30 boasts innovative tubeless pneumatic tyres with an internal anti-puncture coating, a double-braking system that provides more stability, fast charge solutions with a convenient built-in A/C adapter, and many other features to make the riding experience more comfortable than ever before. The new Ninebot MAX G30 is expected to become available in stores across Europe, Middle East and Africa from October onwards.

Ninebot KickScooter MAX G30DInspired by the G30 model, this version of the KickScooter is especially designed for the German market. Its features and specifications have been developed to comply with the recent German eKFV requirements and have been integrated into one sleek design. This model is additionally equipped with the certified reflectors and lights on the front, sides and rear, and allows fully independent control of the 2 brakes, and is equipped with a Vehicle Identification Number and an integrated insurance plate (sticker) area within the rear fender. The new Ninebot MAX G30D is expected to become available in stores across Germany from September onwards

About Segway-NinebotSegway-Ninebot is a global enterprise in the fields of intelligent short-distance transportation and service robots. In 1999, Segway is established in Bedford, NH, US, which is the world leader in commercial-grade, electric, self-balancing personal transportation. Ninebot is an intelligent short-distance transportation equipment operator integrating R&D, production, sales and service, established in Beijing, 2012. After Segway and Ninebot’s strategic combination in 2015, Segway-Ninebot was established. At Present, the company’s businesses are all around the world and have subsidiaries in Beijing, Seattle, Bedford, Amsterdam, Seoul, Singapore, Munich, Changzhou and Tianjin, selling products in more than 80 countries and regions. With the world-renowned intellectual property, Segway-Ninebot will create more products that will lead the users and the entire industry into the future.

Ninebot KickScooter MAX, Powered by Segway, Has Raised More Than USD 1.6 Million on Indiegogo Since its Launch
October 14, 2019